Jared Kushner, son-in-law and senior adviser to former US President Donald Trump, reveals in a forthcoming book that when Trump decided to recognize Jerusalem as Israel’s capital and move the US embassy there in 2017, the reaction of then-Prime Minister Benjamin Netanyahu was decidedly cool, according to Forward.

Kushner’s book, Breaking History: A White House Memoir, is due to be published on August 23.

The book reportedly said that in a phone call before the official announcement, Trump informed Netanyahu of the move, but the former prime minister simply replied: “If you decide to do that, I’ll support you.” Kushner wrote that a confused Trump, who had expected a backlash, repeated himself, to which Netanyahu again “responded with less than expected enthusiasm.”

“Trump began to consider his decision… [he] wondered aloud why he was taking that risk if the Israeli prime minister didn’t think it was that important,” Kushner wrote, and claimed that Trump then told the former prime minister, “Bibi, I think you’re the problem.”

Netanyahu “coolly countered” by explaining that he was part of the solution. However, Kushner wrote that he could see that Trump was visibly “frustrated.”

Kushner apparently did not say why he thought Netanyahu responded that way.

A statement from Netanyahu’s office said that, “Contrary to claims, Prime Minister Netanyahu, who has repeatedly asked President Trump to move the embassy, ​​expressed great appreciation for this decision.

“President Trump told Prime Minister Netanyahu before he made the decision: ‘Some of my people say this step will be dangerous for the United States. What do you think?’ Netanyahu responded that he saw no real danger and that there was no reason not to move the embassy.

“It is doubtful that the embassy will be moved if Netanyahu responds to the president otherwise.”

Jerusalem has been the capital of Israel since its founding in 1948, although much of the international community does not recognize it, as the original UN partition plan called for Jerusalem to be an international city. 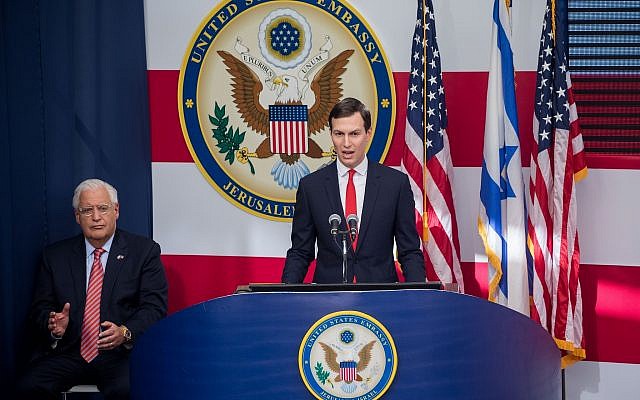 Senior Advisor to the US President Jared Kushner (R) speaks as US Ambassador to Israel David Friedman looks on at the official opening ceremony of the US Embassy in Jerusalem, May 14, 2018. (Jonathan Sindel/Flash90)

Trump formally recognized Jerusalem as Israel’s capital in December 2017, when he announced plans to move the embassy there. In May 2018, his administration opened the new facility, a move that was met with intense controversy in both Washington and the Middle East.

Following the move, the Palestinians, who claim East Jerusalem as the capital of a future state, cut ties with Washington, calling the Trump administration biased toward Israel.

At the time, Trump said the decision was made to advance US interests and peace in the region and out of respect for Israel’s sovereignty.

Kushner’s book also reveals that Trump was irritated by the extended three-hour meal he attended with Netanyahu during his 2017 visit.

“It was beautiful, but every time I thought the meal was going to be over, another dish came,” Trump apparently told Kushner, complaining that the then-prime minister was “talking in my ear.”

Netanyahu and Trump maintained a good relationship during his time in office, until Trump felt himself betrayed by Netanyahu when he congratulated current US President Joe Biden on his 2020 election victory.

Kushner is married to Trump’s eldest daughter Ivanka and serves as a White House adviser. He played a significant role in the previous administration’s Middle East policy, participating in the diplomatic push that led to the Abraham Accords, a peace agreement that led to Israel establishing diplomatic relations with the United Arab Emirates, Bahrain and Morocco.

Times of Israel staff contributed to this report.

We’re really glad you read h Times of Israel articles in the past month.